Final Project "The Boy and the Bear"

We had the last 4 week of the Pro 3D animation workshop with Erik C. Schmidt. The aim was to direct a short scene around 30 sec. I ended up with more than a minute long scene. Here comes the Film and how I made it. Enjoy!

Compare to the previous weeks (10 sec in 2 weeks) it was more challenging and not just because it was longer animation but we also had to make a more detailed storyboard, concentrate on modeling the sets and props, setting up the lights and render and to record and do the sound design - making a whole Film.

Idea and Story
We already started to work on characters and stories a month before on a weekend with the actor/teacher Philip Watt so some of us kept and developed the ideas we got there. My final idea came only one day before we started the final project (just in time…)
The inspiration was one of my older illustration and the scene I did for the Dialogue (Bandit Hat). Then I started to work on the storyboard which improved every time when I talked about it with Erik and my classmates.


Reference videos
As the story changed or widened I recorded more and more reference videos that helped me a lot in the animation as well. Here you can watch two of them:


Visual research
I used the Norman rig that I re-modeled. The result somehow looked like me : ).
For the final look of the attic I collected few attic photos then modeled the attic gave a little wooden texture and put a few objects to set the mood.

The second 2-week's assignment was the Dialogue animation also with Michelle Meeker.
We had to choose a 10 sec audio. I found an energetic one in Fantastic Mr. Fox where Ash freaks out because his father didn't involve him in his chicken stealing plan.


Work in progress
These two sketches were my first ideas for two different audios. Finally I've chosen the more energetic one. Then I recorded the reference video very quickly as the first acting impression came and then worked out the poses on the paper to understand and memorize them as much I can.
The process went quite the same as the Mime animation, except that we had the lip sync as well to animate. 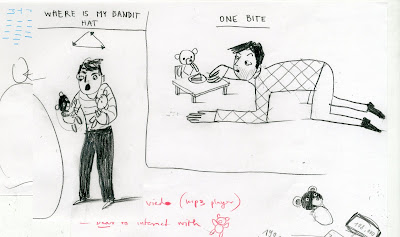 Here are the new post cards that I sent home to Hungary.

PÉTER VÁCZ
Hungary
I make animated films and play the cello. My graduation film 'Rabbit and Deer' from MOME Anim has traveled around the world and won over 100 awards. I'm also proud of my other films; Streamschool, All I'm Saying and Satellite Dish. Thank you for visiting!